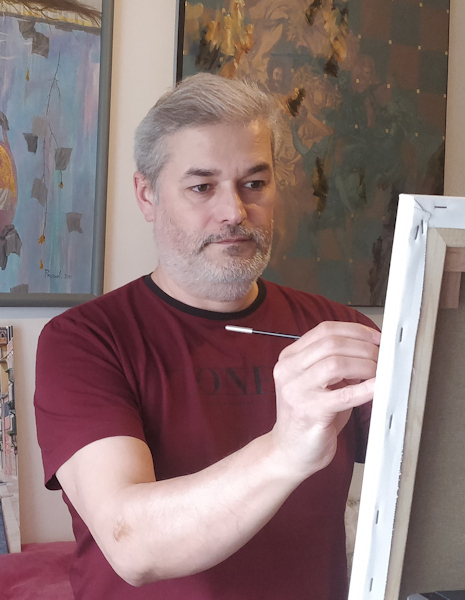 Born at 15 april 1968 in Chisinau, Rebublic of Moldova 1979-1983 Children\'s art school \"A. Sciusev\", Chisinau 1983-1987 Republican College of Fine Arts \"Alexandru Plamadeala\" from Chisinau 1990-1993 Restoration of three churches in \"Stefan Voda\", R. Moldova SOLO EXHIBITIONS 1984 Chisinau, Moldova 2002 Iasi, Romania 2004 Iasi, Romania 2005 Iasi, Romania 2006 Iasi, Romania 2006 Focsani, Romania GROUP EXHIBITIONS 1994 Thessaloniki, Greece 1996 Chisinau, Moldova 2000 Athens, Greece 2000-2001 Chisinau, Moldova 2001-2002 Athens, Greece PAINTINGS IN PRIVATE COLECTIONS: Republic of Moldova,Romania,Russia,Greece,Germany,Austria,Denmark,SUA,Malta,Spain Aureliu Prodan was born în 1968, in the family of the paintings conservator, Serafim Prodan from Chisinau, Republic of Moldova. He received his first art lessons from his father. Since he was a child, he loved going to the Art Museum where his father worked, to admire the exhibited paintings. He was fascinated by the paintings of the Russian, Dutch and Italian painters. The colours and the finely processed details from the static nature and landscapes, awakened his desire to study drawing and painting. In 1980 he was accepted at the A. Sciusev Art School. He was appreciated and encouraged by his professor, the well known graphic artist V. Motcaniuc, who discovered in Aureliu an original and very talented young artist. In 1987 he graduated the College of Fine Arts „A. Plamadeala” and started working as painting conservator together with his father, at the Art Museum from Chisinau. In the same period he participated in the restoration of three orthodox churches in the south of Republic of Moldova. His first personal exhibition took place when he was at the College of Fine Arts, following other personal and group exhibitions in Republic of Moldova, Greece, Germany, United States of America, Russia and the Netherlands. The well known romanian art critic, Valentin Ciuca, said about Aureliu: “Settled in Iasi few years ago, Aureliu Prodan observed and prepared the artistic taste of the people from Iasi through few discrete exhibits and he placed himself in an expressive formula which satisfies both the strict artistic requirements and the wide range of taste of the people. He has not necessarily had in mind a vanguardistic or in fashion speech, but only the fulfillment of a path of an honest creator dedicated to a harmonious dialogue with the world and with himself. His skills as an art craftsman achieved during his studies at the “Alexandru Plamadeala” Art College from Chisinau and in his family environment, those couple of church restorations from Bessarabia, allowed him outlining his own style and even his personality. He has cordial connections to the reality in its general sense, he probes in the vast universe of the visibility and he identifies, through forms and colors, the harmony of the world. His works, polyphonic in the sense of the musicality of the tones, define sentimental person able to dream with his eyes open and to see what he imagines. His background quality that characterizes him is the capacity to transform his wonders and joys as an artist into enjoyment for the others. I have the feeling of a natural sense of generosity, of a human route hidden from the falls in the nothingness of the untold egos and I feel an extreme assumption of the dialogue with the others. I am not surprised, therefore, that important intellectuals or simple lovers of what is beautiful do not hesitate to tone their intimacy and through the help of a watercolor or of an oil painting signed by him. Aureliu Prodan does whatever he wants out of his watercolors: an Ephemeridae bound to last. Delicate, polychrome, spontaneous, harmonious, these fragile notes about the reality beyond the visibility, these watercolors have a musicality of the chromatic tones depicted from a menuet musical sheet. The rhythm of the shapes, the tones and the counterpoint elements converge towards the state of the ineffable poetry of the flowers, scents and seasons. Every now and then the spell produced by the flowers with an ephemeral existence transforms itself into a vigorous cavalcade where the beautiful horses give vital substance to the land over which they are floating in a vast and elegant flight.”